General appearance: One could say that of the 13 species comprising the genus Butia, Butia yatay is the most beautiful palm tree, elegant and attractive, especially during the first 15 -20 years of life.
A solitary trunk palm up to 10-12 meters high, with a showy crown of deeply arching grayish-green leaves. Its trunk can grow from 40 to 60 cm in diameter when mature and preserve the remains of leaf bases, making up an attractive appearance, but usually, older trees have a smooth trunk with few traces of leaves

Description: Solitary, monoecious, pinnate leaves. The trunk is covered by old leaf bases, which are elongated and arranged in an orderly manner around the entire perimeter. 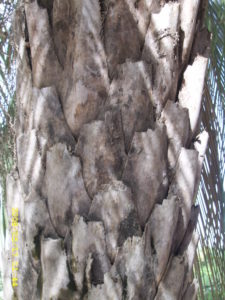 Leaves: 1.5- long, with approximately 140 leaflets. Petioles are relatively slender, with bumps on the margins, turning into curved, sharp, about long gray spines in the highest part of the petiole, transforming to fibers at the broad leaf bases . Such fibers form a sort of brown and rough burlap between the leaf bases. The petiole is adaxially flat at the base and becomes keel-like up the rachis.

Petioles begin straight, but quickly arch deeply, like the rachis, so that the apex of the leaf almost reaches the ground or the trunk. 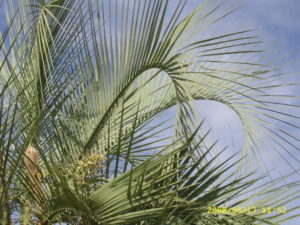 Leaflets are very rigid, upright, and attach to each side of the rachis in a single plane, both planes forming a well defined “V”. 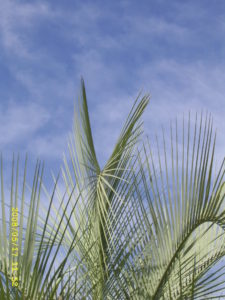 Inflorescence: pleonantic, interfoliar, flexuose, 1- long, protected by two woody, ridged spathes. Yellow flowers in groups of 3, with 3 sepals, 3 petals and 6 stamens in male flowers. It blooms in spring and fructifies in summer.

Fruit: ovate, pointed, 5 x , yellow-orange when ripe, with a thick mesocarp and protected at the base by bracts and a sort of spike on the end. Fruits are edible and often used in jelly and liqueur. One thin, elongated seed per fruit, which may sprout in 90-180 days. It is common to find seeds with more than one embryo. 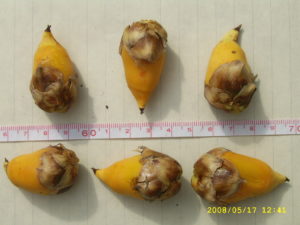 B. yatay tolerates low temperatures well and can take frost to -10 º C. It prefers organic-sandy soils but may grow on limestone and clay, provided they are deep and well drained.

Distribution: It occurs naturally in both coasts of the Uruguay River in and the . The highest concentrations of these palms occur between 30º and 33° S, especially in northeastern , at “Palmar de Colón” in the and the “Palmares de Quebracho, Chapicuy, Porrua and Mujica in the . Note that in Spanish, a forest made up mostly of palm trees is called “palmar”.

“Palmar de Colón” is considered the largest concentration of natural monospecific palms of the , covering a strip of land that borders the with a width of approximately 10- and a length of , totalling an area of about , which means about 30 million specimens of B. yatay.

At present, farming, repeated burning of grasslands, invasion by exotic flora, the action of herbivores and trampling by livestock, have drastically reduced the number of palms. Only are protected within a National Park, with an approximately 250 years old population of nearly 2 million specimens of Butia yatay . 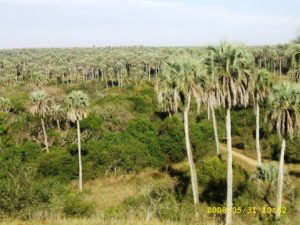 The effects of radiation and seed dispersal have extended the original boundaries of this natural habitat of B. yatay, so that, nowadays, specimens of this species can be found throughout the provinces of Entre Ríos, , east of along the and south of Misiones, all these territories in .

Meanwhile, in the , Butia yatay has a natural habitat on the east coast of the Uruguay River in the and Paysandú, although the population density is much lower than on the western bank of that river.Butia yatay can also be found in the south of the State of Rio Grande do Sul, in , but in isolated populations and a low number of specimens. 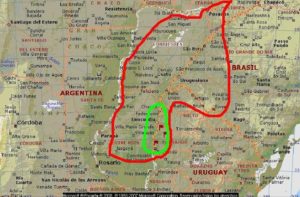 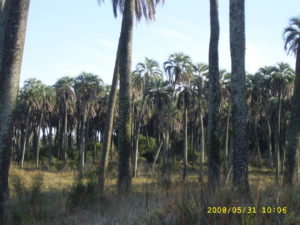 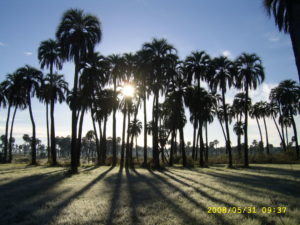