This classification has originated many discussions, specially the case of A. aculeata, as there are significant visible differences between specimens growing in different regions, such as: sheaths of old leaves staying on the trunk, bigger crowns, bigger fruits and, the strangest of all, that some of them have an undivided first eophyll and some have bifid eophylls.

Of course, this could be clarified through deeper studies and DNA research, thereby determining whether or not they belong to different species or if they are just phenotypes or ecotypes. 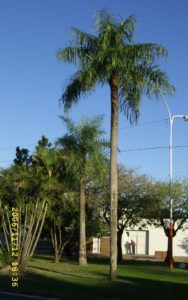 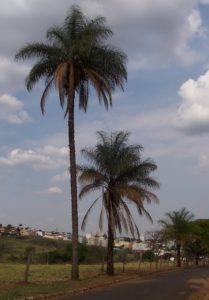 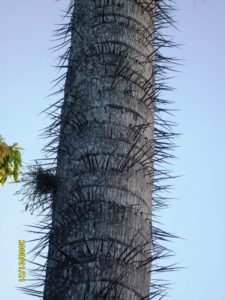 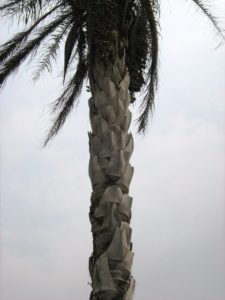 Geographical distribution: A. totai is broadly distributed in South America, found in Bolivia, Paraguay, central & south Brasil to the north of Argentina, in the provinces of Chaco, Corrientes, Misiones, Formosa and Salta. 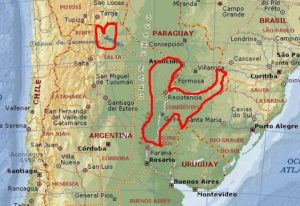 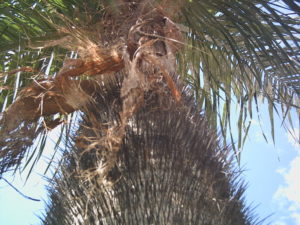 Description:
Monoecious palm tree with a 10-15 m high and 40-50 cm diameter, occasionally with a slight bulge at the base or in the middle, simple trunk. It may be covered with rests of old leaves and often armed with up to 12 cm long cylindrical spines, specially when young, along incomplete circles, spaced 10-12 cm throughout the trunk.
Pinnate 2.5-3 m long leaves, with grayish green segments and abaxially whitish, several-ranked leaflets along a spiny 40-80 cm long petiole. The leave rachis, also spiny on both sides, has more than 100, 40-70 cm long and 1-2 cm wide, reduplicate, several-ranked and bifid tip leaflets. Leaves bases are split, spiny and have indument. 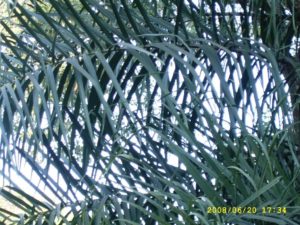 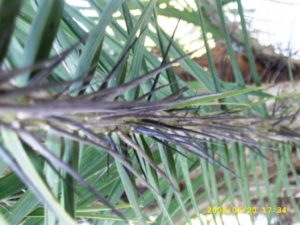 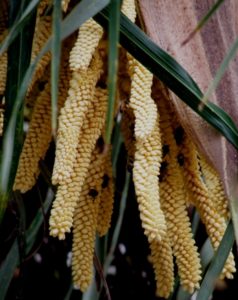 Globose, 2.5-5 cm diameter fruits with yellowish green smooth epicarp that turns almond brown when ripe. The mesocarp is fleshy, yellowish and abundant, very rich in oils. Endocarp is dark brown to black, hard and 3-4 mm thick and bears three pores off the equator. The seed has a 1.5-2 cm diameter and germinates in about 18 months. Cromosomes: n=15 (Uhl and Dransfield 1987). 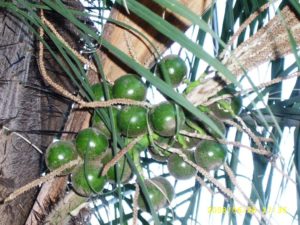 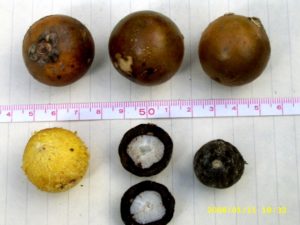 Unripe and ripe fruits, mesocarp, endosperm and seed
Habitat: A. totai does not develop into big palm groves. It grows in small groups or isolated. Cattle and other mammals (some bats) help in its propagation and, apparently, grass burning helps its germination, thus making this species a pioneer in regeneration of burned flora. It is commonly found disperse and separated from each other over tens to hundreds of square meters of land.
It prefers deep and sandy, not subject to flooding ground, with not so deep underground sheets of water. It tolerates modified, clayish ground well and it is often found in spiny forests sharing its habitat with various species of trees. It normally grows on open plains or on deforested land , frequently found on disturbed land, in areas with well defined rainy seasons, normally on low lands, although it has been found at 1200 m above sea level in Colombian Andes.
The distribution rank is influenced by humans. 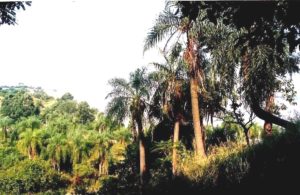 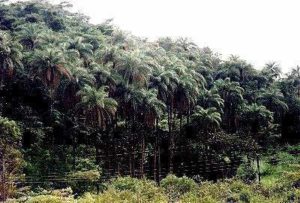 Phenology: A. totay blooms from the beginning of spring until mid-summer and its fruits mature by the end of winter, although they remain attached to the tree for some time after.

Pollinators and dispersers: Besides the wind’s action, the main pollinators are Curculionidae, Nitidulidae, Escarabaeidae and bees, mostly honey bees. 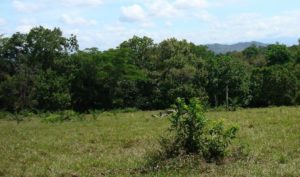 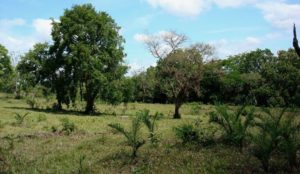 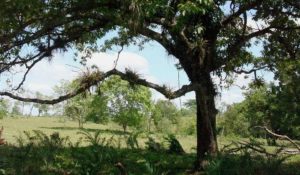 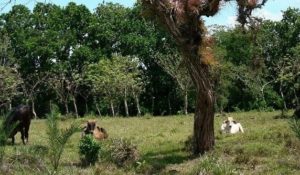 Seed dispersion by cattle.
Uses: As many other palm tree species, every part of Acrocomia totai was and is still used throughout America. Although it is nowadays mainly used for cosmetics, soaps and bio-diesel, in native cultures it was a source of food, beverages, clothing, fibers, threads, cattle food, oils and margarine, needles, firewood and charcoal. Palmetto hearts come from its shoots, hypertension and diuretic medicines from its roots; its seeds are used as beads for necklaces and bracelets; its fruits are eaten fresh or as preserves and its endosperm is also ground and brewed with milk. 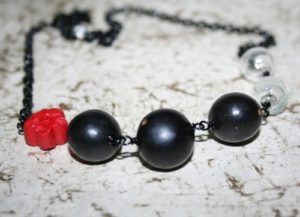 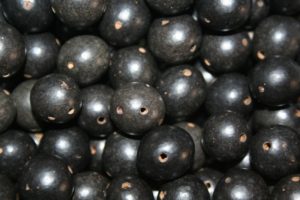 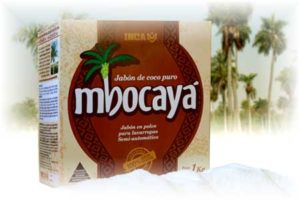 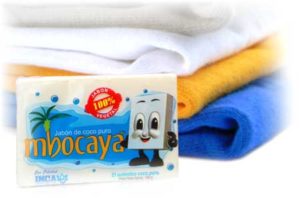 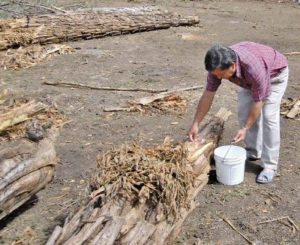 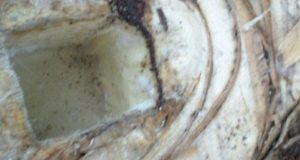 Multiplication and cultivation: A. totai multiplies by seed, which may take more than 18 months to germinate. It is best to take away the epicarp and mesocarp (skin and pulp), to scarify the endocarp by any mechanical means and soak it in water during approximately 20 days at ambient temperature, changing the water periodically. After soaking, and without letting it dry out, it must be superficially sowed in sand or peat, put on a shady location at 20°-30°C, and kept always moist. 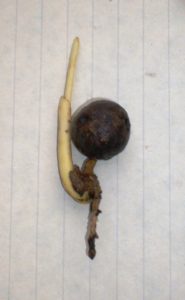 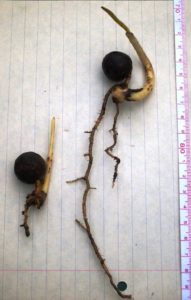 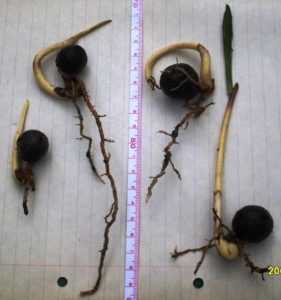 Germination details
Once germinated, the shoots must be moved, when the first eophyll appears, to a minimum 20 cm deep container, taking care not to damage the roots, as this species is very sensitive to disturbance of its root system.

It is particularly noted that, during the early stages of development, the cotyledon petiole grows downwards and then strikes upwards out of the soil, thereafter sprouting the first ligule and eophyll. In this change of direction, a tight fold is formed, which keeps developing as time goes on, and changing into a sort of “bulb” that is part of the stem of the palm tree and, as the rest of the trunk, it is spiny. This underground spines are thought to be a defensive strategy against digging mammals, such as the wild pig, the armadillo (Dasypus septemcinctus), the Tatu Carreta or giant armadillo (Priodontes maximus), which, do not feed from this palm tree, but cause irreparable damage to the plant anatomy when digging up their nests. 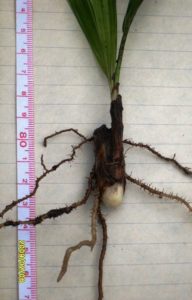 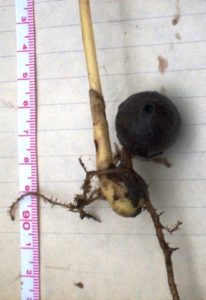 Formation of «bulb» in shoots 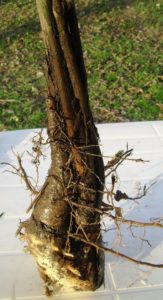 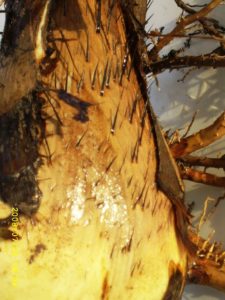 «Bulb» with spines in young palm tree
It is convenient to place the seedlings in a shady location and to keep them moist until the plant grows its first pinnate leaves. Then, it may be placed in a sunny location. Once adult, A. totai resists transplantation very well and may not suffer great damages if cultivated in zones with minimal temperature of -5°C.

The presence of spines on its whole structure makes this species unwelcomed for landscaping, nevertheless, it is very easy to take the spines away from the trunk so as to make it safe and enjoy it in our gardens. Another option would be planting climbing species such as Photus (Epipremnum aureus) or some of the many beautiful species of Philodendron to protect people against the trunk spines.

I should not fail to mention the great potentiality of this species in industrial exploitation, specially in those emerging countries which regional economies face difficulties and rural inhabitants undergo a hard daily life in their search for a means to sustenance and a better standard of life.

Despite the availability of such a noble vegetal species which is so easily propagated and cultivated, it is unbelievable that its massive or local industrialization, as an economic resource for subsistence, is neglected.

The following report backs-up the above:

SIXTH CONGRESS OF RESEARCH AND INTELECTUAL CREATION AT UNIMET

For this research , an evaluation was made on the oil extraction from the nut of the “corozo” fruit to be used as raw material in the oil industry. The mentioned fruit comes from a native palm tree distributed in Central and South America. Forty mature fruits were randomly selected from the town of Macapo, Cojedes State. Their nuts were removed and then ground down to flour and sieved. Oil was extracted using the solvent (n-hexane) extraction procedure in a Soxhlet equipment, at lab and pilot scale.

The conclusion is that “corozo” oil may be used in cosmetics and pharmaceutical industries, and in the elaboration of food products such as cookies, coverings, glazings and similar cacao products, as its composition is similar to that of coconut and palmiste oils
Besides the above-mentioned, we should not forget the strong possibilities of obtaining bio-fuel from this palm tree.

And, most important, it would not be a long-term production… no need to sow and wait two, three or five years for harvesting. The palms are there, waiting…

I thank those colleagues and friends who have collaborated with their photos as illustrations for this article. Some of the pictures have been downloaded from internet